This exhibit draws together both a visual evocation of a newly declared national monument – Bears Ears, at the heart of the Colorado Plateau – and the voices of those who have fought to shape its future.

“From earth to sky, the region is unsurpassed in wonders,” President Obama’s proclamation stated, noting the importance of  the region’s dark skies, silence and remoteness. “Protection of the Bears Ears area will preserve its cultural, prehistoric, and historic legacy and maintain its diverse array of natural and scientific resources, ensuring that the prehistoric, historic, and scientific values of this area remain for the benefit of all Americans.”

Today, Bears Ears is under threat of rescission. These images may thus serve as either a celebration of the foresight of visionary leaders from Presidents Theodore Roosevelt to Barack Obama to protect lands that are an essential part of our cultural and natural heritage, or should President Trump and his allies succeed in rescinding Bears Ears National Monument, as an elegy for what was lost – for Native Peoples who advocated so passionately for the monument, and for future generations of Americans.

We are honored to have Stephen Strom, Eric ​Descheenie, and Alfred Lomahquahu join us at Gallery 4 in the Gilbert Museum to discuss Bears Ears on Tuesday, October 10 from 6pm to 8pm.

Eric Descheenie and Alfred Lomahquahu played key roles in establishing the Bears Ears Inter-Tribal Coalition. They will discuss the multi-year effort to have Bears Ears declared a national monument and ongoing efforts to protect the monument from rescission or contraction.

Significantly, for the first time in history, Native Americans were given a powerful voice in managing a national monument. The proclamation calls for the establishment of a Bears Ears Commission, staffed by a representative of each of the tribes comprising the Bears Ears Inter-Tribal Coalition— the Hopi, Zuni, Navajo, Ute Mountain Ute and the Ute Tribe of the Uintah and Ouray.

Commission members will work with their federal counterparts in the Bureau of Land Management and the U.S. Forest Service to set policy for preserving ancestral sites and artifacts, and for providing access to monument lands for traditional cultural and spiritual uses.

The proclamation’s assertion that Native peoples’ traditional ecological knowledge “is, itself, a resource to be protected and used in understanding and managing land” is a compelling acknowledgment of the role the Coalition will play in developing culturally and ecologically sensitive guidelines for land use. 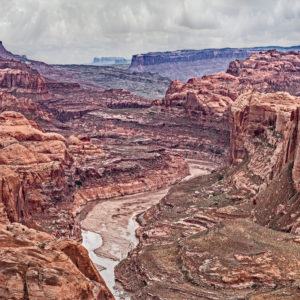 The canyons of the Colorado Plateau reveal in their layers and spires, uplifts and valleys the action of geological forces spanning almost 400 million years. They have witnessed the advance and retreat of oceans, the appearance and disappearance of rich tropical forests and sand dunes, the drift northward along Earth’s molten mantle, the uplift by more than a mile above sea level, volcanic ejections, and over the past 70 million years, sculpting by wind, rain and the paths of the rivers that run through it.

The full drama of these events is recorded in the mesas, sandstone cliffs, pinnacles and hoodoos of the Plateau. At its center lies the junction of the two great rivers, the Green and Colorado. The rich riparian regions surrounding these rivers and their tributaries provided sustenance to the ancient Native peoples, whose petroglyphs, pictographs, pottery, cliff homes and granaries bear silent witness to once flourishing cultures. To their modern-day descendants, this land and its inhabitants remain sacred. Later, Mormon settlers were called to this arid land and through persistence and belief made it bountiful. Today their fifth and sixth generation progeny retain a strong cultural and spiritual attachment to the land as well.

Minerals below and above the surface as well speak of the region’s rich geological history: coal and oil from tropical forests; sediments of potash deposited when salt-rich inland seas lapped over the land; and uranium-bearing rocks uncovered as the plateau was thrust upward. From the mid-19th century onward, miners and oilmen sought riches from the land. From the latter half of the 20th century onward, tourists and adventurers have been drawn to the land, along with those who seek silence, isolation, and beauty.

Today, the Colorado Plateau finds itself the object of a struggle among Native peoples, the descendants of Mormon settlers, miners, energy producers, recreationists and environmentalists. Some see opportunities for development and growth based on extractive industries. Others wish to continue long-standing ranching heritage or to provide protection for the cultural heritage of Native peoples. Still others wish access to the land for recreation or veneration, while some view this area as so exceptional as to merit preservation as wilderness.

Stephen Strom began photographing in 1978, after studying the history of photography and silver and non-silver photography at the University of Arizona. His work has been exhibited widely throughout the US and is held in several permanent collections including the Center for Creative Photography and the Boston Museum of Fine Arts. His photography complements poems and essays in three books published by the University of Arizona Press: Secrets from the Center of the World; Sonoita Plain; Tseyi; and Otero Mesa, University of New Mexico Press (2008). A monograph, Earth Forms, was published in 2009 by Dewi Lewis Publishing. His most recent books include Death Valley: Painted Light (2015) and Tidal Rhythms (2016), both published by George F. Thompson Publishing.

Eric ​Descheenie ​graduated from Arizona State University and his professional career has included time with Arizona Governor Napolitano’s administration and in Navajo Nation legislative and executive offices. During this time, Eric served as Co-Chair of Bears Ears Inter-Tribal Coalition which achieved designation of the 1.35 million acres the Bears Ears National Monument in 2016. Presently, Eric serves in the Arizona House of Representatives, District 7.

Eric is Diné (Navajo) from Chinle, Arizona. He is Ma’ii deeshgiizhinii (Coyote Pass People Clan), born for Kiyaa’aanii (Towering House Clan). His grandfathers are Bit’ahnii (Folded Arms People Clan) and his paternal grandfathers are Honághááhnii (One Who Walks Around Clan). His greatest joy in life is being the father to three beautiful sons. When not chasing them around, he enjoys long distance running, traditional knowledge study, and serving on community boards, including the Arizona Town Hall Board of Directors.

​Alfred Lomahquahu is the Vice Chairman of the Hopi tribe and co-Chair of the Bears Ears Inter-Tribal Coalition. Alfred spent his early years in Bacavi and Hotevilla and joined the Marines  after graduating from Sherman Indian High School in Riverside, California in 1982.  His first deployment was to Okinawa, Japan in 1983; from there, he trained with Marines from Thailand and Korea, building roads and supervising infrastructure projects in Africa, Lebanon, and Afghanistan.
Within a few years following his return from his tours of duty, Lomahquahu took up Kachina carving and achieved both regional and national recognition for his work. After a nearly 30 year absence from the Hopi reservation, he returned to his homeland and began working as a cancer educator. Over time, he became deeply involved in spiritual life in the community and is now a leader in kiva ceremonies.
Lomahquahu believes that he and his fellow members of the Bears Ears Inter-Tribal Coalition have been called by a higher power to the mission of protecting ancestral lands.

In celebration of the Bears Ears Monument, Laura Tohe will read a short selection of her poetry during the closing reception of The Bears Ears: Seeking Common Ground on Sacred Land exhibition this Saturday from 4 – 6pm in Gallery 4 at the Gilbert Museum.

Laura Tohe is Diné.  She is Tsénahabiłnii, Sleepy Rock People clan, and born for the Tódich’inii, Bitter Water clan.  She grew up at Crystal, New Mexico near the Chuska Mountains on the Diné homeland.

Her published books include Making Friends with Water (chapbook); No Parole Today, a book on boarding schools; Sister Nations: Native American Women Writers on Community, co-edited with Heid Erdrich; Tseyí Deep in the Rock, in collaboration with photographer, Stephen Strom; and Code Talker Stories, an oral history book with the remaining Navajo Code Talkers.  The Phoenix Symphony commissioned her to write the libretto for Enemy Slayer, A Navajo Oratorio, which made its 2008 world premiere as part of the Phoenix Symphony’s 60th anniversary.  A compact disc recording of Enemy Slayer is on the Naxos classical music label.  It received rave reviews by the Arizona Republic and was called “a triumph” by Opera Today.

A poet, writer, and librettist, Tohe’s work has been published in such journals as Ploughshares, New Letters, cream city review, Red Ink, World Literature Today and many others. Her work has appeared in the U.S., Canada, South America and in Europe with French, Dutch and Italian translations.   She has read her poetry internationally in the U.S., Europe, and South America. Laura holds a doctorate degree in creative writing, Indigenous American Literature, and American Literature.

Laura is Professor with Exemplar Distinction in the English Department at Arizona State University and is an Arizona Speaks presenter for the Arizona Humanities that awarded her the 2006 Dan Schilling Public Scholar award.

In 2015 Laura was honored as the Navajo Nation Poet Laureate for 2015-2017, a title given to her in celebration and recognition of her work as a poet and writer.

About the Book
The work to support Bears Ears National Monument will continue through the publication of a book by Stephen Strom and Rebecca Robinson. Hopi, Navajo, Ute Mountain Ute, Uintah, and Ouray Ute, and Zuni tribes will continue to play key roles in the ongoing effort to protect the monument from rescission or contraction.

In preparing the material for “Bears Ears Country: Seeking Common Ground on Sacred Land” (University of Arizona Press, summer 2018) over 70 individuals were interviewed, we listened to people’s stories of their connection to the land – both supporters of the monument and those who were against its designation. There is a complex and nuanced story beneath the dramatic and inflammatory headlines, informed by a rich and storied history and embodied by individuals sharing a passion for Bears Ears Country.

In telling the stories, in depth and with compassion and respect, our hope is that people will have a chance to be heard and will have a chance to hear others with openness to their different life experiences. And that through listening and caring, people can come together in respectful dialogue and find solutions that have eluded previous generations. 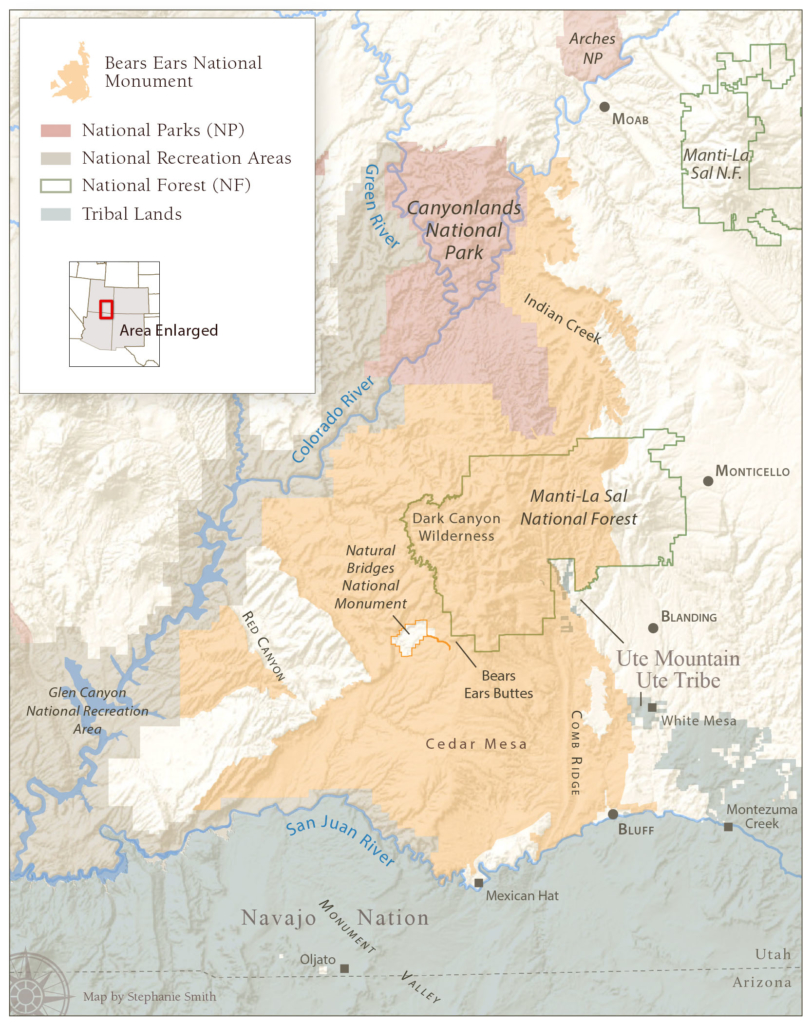